God is the Greeter at the Pearly Gates

Being a greeter at Caesar’s Palace is not quite the same as being a greeter at Wal-Mart, but it’s still a tough gig if you’re Joe Louis. But then that’s life. It is pay as you go. Like it says is that Irving Berlin song, you face the music and dance before the fiddlers have fled, then they ask you to pay the bill. Maybe the bill contains items you didn’t intend to pay for, but you are responsible for them anyway. It is the way it is. 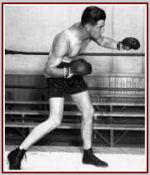 Cinderella Man is about to be released. It is a biopic of boxer James J. Braddock, a middling boxer, who hit rock bottom and rebounded to become world champion. His tale is one of the great American stories and it is about time he got a movie. Even Rocky Graziano got a movie – starring Paul Newman (who bears as much resemblance to Rocky Graziano as an Afghan Hound bears to a pug dog). Braddock’s career as champion lasted two years – from June 13, 1935, when he beat 10 to 1 favorite, Max Baer (whose son Max Baer, Jr. was, as you recall, “Jethro Bodine” on television’s The Beverly Hillbillies) until he lost the title on June 22, 1937.

He lost to Joe Louis. Braddock was, by all accounts, way ahead on points in the eighth round when a lightning bolt of a right hook took his consciousness and he fell face down on the canvas. That kind of thing happens in boxing. It had happened to Louis earlier in a fight against Nazi poster-boy, Max Schmeling. After the Braddock fight, Louis had mixed emotions about being champion. “I figured I wouldn’t feel like a real champion until I got that Schmeling. That’s what I fixed on,” he remarked.* One year to the day after Louis became champ he got payback, crushing Schmeling in the first round.

Payback, having all things square, was important to Joe Louis. Before he was “the Brown Bomber” Joseph Louis Barrow was a share-cropper’s kid from Alabama who lost his father early. When his mother remarried the family moved to Detroit where his stepfather worked in the automobile industry, and Joe worked on an ice-truck. There was a time, early in the depression, when his family had to go on relief for several months. When Joe started earning money as a fighter he sent the United States Government a check for $269 – the amount of the relief checks his family had received. He said that made him, and his mother feel better.

His is another great American story, but one that ends in bitter irony. Joe Louis was arguably the greatest heavyweight boxer in history. He held the title for more than 12 years (a record), defending his belt 22 times with 21 knockouts, and taking two years off in the middle of his career to serve in the U.S.Army during WWII. Before his retirement in 1949 his only professional loss was as a result of that lucky punch by Schmeling, late in a fight before he was champ. When he retired, he found that his accountants had lived well off of money they should have been sending to the IRS. The fine people at the IRS may, or may not, have known (or cared) that Joe never intended to cheat anyone, that he volunteered (unlike John Wayne) to serve in the army, and that he voluntarily paid back the relief checks his mother had received. What they did know was that he owed them several thousand dollars, and they wanted their money back, champ or no champ, or Joe Louis was going to jail. And so, well past his prime, Joe Louis re-entered the ring.

He faced the top two contenders, loosing on points in a closely fought 15 rounder with Ezzard Charles, then being knocked out in the eighth round of a brutal fight with Rocky Marciano. Realizing he couldn’t make much money fighting anymore, he took whatever jobs his celebrity provided, and ended up a greeter at Caesar’s Palace in Las Vegas.

Being a greeter at Caesar’s Palace is not quite the same as being a greeter at Wal-Mart, but it’s still a tough gig if you’re Joe Louis. But then that’s life. It is pay as you go. Like it says is that Irving Berlin song, you face the music and dance before the fiddlers have fled, then they ask you to pay the bill. Maybe the bill contains items you didn’t intend to pay for, but you are responsible for them anyway. It is the way it is.

It is the way it is, here, in this world, because the rules we make lack something only God can give us. The rules we make take no account of grace. Joe Louis found himself owing a debt he could not pay without sacrificing his body and demeaning his spirit. In God’s system, when we find ourselves even more desperately circumstanced, “at the right time,” Jesus dies for us, and cancels that debt (Romans 5.5-10). On judgment day, we will not be presented with a bill detailing the balance owed, and told to serve as a greeter at the door. We will hear: “Well done, good and faithful servant, enter into the joy prepared for you before the foundation of the world,” (Matthew 25.21,34). God is the greeter at the Pearly Gates.