'I'm still seeking God for what to say, but he has convicted me that something must be said,' one minister proclaims. 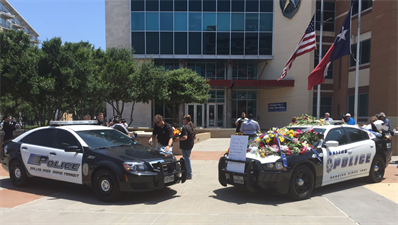 DALLAS — “What will you say on Sunday? Will your message be different than originally planned given what has occurred in our nation this week? If so, how?”

The Christian Chronicle asked preachers those questions in the wake of Thursday night’s slayings of five Dallas police officers, which followed what had been a peaceful protest over the police shootings of black men in Baton Rouge, La., and Falcon Heights, Minn., earlier in the week.
RELATED: Churches responding after Dallas officers killed
Here are some of their responses:

“It will be different. Not sure what yet. My father-in-law is a police officer, and my three nephews are black. This week has hit me hard. I'm still seeking God for what to say, but he has convicted me that something must be said.” — Jeff Dunn, East Side Church of Christ, Snyder, Texas

Antwan D. Brown “This has hit me in more ways than one. I am a black American law enforcement officer, and if I remain silent about these tragedies, I do all of us an injustice. My series this month is, ‘The Healings of the Fruit of the Spirit,’ which I suppose is timely (I credit God). So I will take this time to really speak on love and how it is hard for a people to know joy and peace when they are not shown love or it is not demonstrated towards them.” — Antwan D. Brown, Barton Avenue Church of Christ, Luling, La.

“We are in Acts 4, ‘Bold Faith.’ I was going to speak more about the general ideas of that, but after this week, I am moving to talk about recognizing the marginalized and bringing them into the presence of God. … I will also be encouraging our church to begin a campaign to honor and commend the officers and public servants that have gone above and beyond the call of duty.” — Andrew Hill, Mountain Avenue Church of Christ, Tucson, Ariz.

Roger Woods“I am speaking on how faith in Christ gives us courage (planned a month ago). I was already using an MLK quote about fear knocks, faith answered ... so I will address the situation by talking about how our faith must be strong so that we are not held captive by fear.” — Roger Woods, Walled Lake Church of Christ, Michigan

“I have scrapped the planned sermon. We will talk about the lament Psalms — and yes, we will have a dialogue. I will ask how people are doing emotionally, spiritually. So it will not be a normal sermon. I understand that Southside may be unique and not everyone is welcome to have such an informal time of teaching. I agree — we do not always need a sermon.” — Randy Clay, Southside Church of Christ, Salt Lake City