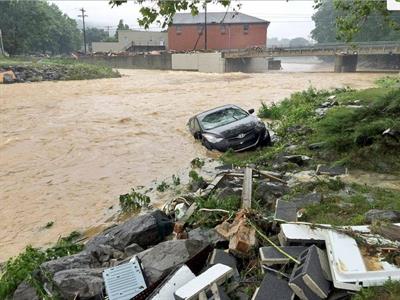 Out of the all the things Joseph Pauley could name that would help West Virginia’s flooded communities, he chose plastic totes.

“When people find things that they can salvage, they need something to put them in,” the Belle Church of Christ minister said, “the problem is…we’re trying to buy them and we can’t find them.”

Pauley is coordinating the distribution of relief effort supplies at the Elkview Church of Christ in Elkview, W.Va. When he began spreading the word that they needed totes, the Belington Church of Christ bought as many as they could find — 99 — and sent them to Elkview, nearly three hours away.

Relief efforts are pouring into West Virginia as the state, its people and its churches recover from flash floods that took 23 lives, including two children, last weekend.

Pauley said that Elkview and other churches across the state are offering not only supplies, but also emotional encouragement to flood victims.

“We’ve hugged and cried with people,” Pauley said, “We’ve had people come in and we ask them what do you need and they say ‘I don’t know.’

“We had a man come in (Wednesday). He was just so overwhelmed. His wife died two weeks ago, and (the flood) wasn’t a total loss for him, he has some people helping him, but he’s just so overwhelmed on what to do going forward that he — probably a 60-year-old man — just stood there and wept.”

The flooding from Elk River crested at 33 feet on Friday and left the central West Virginia towns of Rainelle, Richwood and Clendenin devastated.

Matthew Benefield is a minister at the North Beckley Church of Christ, 50 miles away from Rainelle. The church partnered with Churches of Christ Disaster Relief Inc. to deliver supplies to the Rainelle area.

“Rainelle and Rupert, they both got smashed,” Benefield said. “Most of the water is gone but some of the roads are gone.”

The church is driving supplies out to those who lost vehicles during the flooding and one of the volunteering men received a kiss of gratitude in return, Benefield added.

“It’s hard seeing all the hurt, but it’s nice seeing a truckload arriving every five minutes trying to help these people.”

The top item of need in Rainelle: bleach.

“They’re all wanting to clean out their houses and kill all the mold – that’s the problem,” Benefield said of citizens in the flood’s aftermath.

RISING UP OUT OF THE WATER

At the Elkview church, member Alan Ketchem said “in tragedy comes blessings, and the blessing is that people are being served by those who are serving.”

The 40-soul congregation offers supplies from the church building and is taking also necessities out to those who lost their cars.

Ketchum said the community as a whole is also focusing on neighbors helping neighbors.

“One guy came in and said, “All I need is water, save the rest of the stuff for people who really need it,’” the former church elder recalled. “So people aren’t being greedy and taking stuff they don’t need, and that’s one of the best ways you can help your neighbor.”

In the southeast part of the state, Disaster Assistance CoC is also sending volunteers and trucks brimming with supplies to the stricken counties. Mike Baumgartner, the president and CEO of the outreach mission, is leading a team to White Sulphur Springs on July 2.

The team is working with state Sen. John Unger to gather volunteers for cleanup, repairs, meal prep and delivery. Anyone interested in joining can email  with names, contact information, days available to work and the state the group is traveling from.