The Texas church member stood by the cozy fireplace where he used to glance out the window and enjoy God’s creation.

TEXAS TORNADOES
• Tornado victim Timothy Harris — pictured with wife Vicki — lived by faith
• After the storm, heeding Jesus' wordsNow, crumbled bricks, broken glass and sticky yellow insulation surrounded him as he stared directly into the dark sky.
Soaked as he picked through the remains of his family’s tornado-devastated house, the 50-year-old father of two counted his blessings.
“It’s been a very good reminder of how quickly what we view as a home here in this world can just vanish and be torn apart in 15 seconds,” said Patterson, a deacon of the Saturn Road Church of Christ in nearby Garland, Texas. “It’s been a reminder that his world is not our home, and we should be focused on what is eternal.” 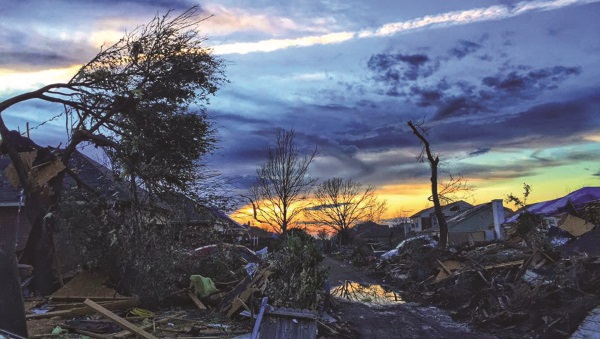 Patterson, his wife, Michelle, and their sons, Blake, 21, and Cameron, 16, were celebrating the holidays with extended family in Georgia when an outbreak of tornadoes struck North Texas.
Twelve people — including Timothy Harris, a member of the Johnson Street Church of Christ in Greenville, Texas — died as the tornadoes wreaked havoc the day after Christmas.
A sign on a tree next to the Pattersons’ residence warns of the unsafe conditions after the storm. (PHOTO BY BOBBY ROSS JR.)About 2,000 homes and buildings were damaged, and the Insurance Council of Texas estimated claims could hit $1.2 billion.
Dallas-area congregations — including the Eastridge Church of Christ in Rockwall, the Meadow View Church of Christ in Mesquite, the Ovilla Church of Christ and the Wylie Church of Christ — mobilized to serve victims and first responders.
Austin Roach, 31, worked with the Serving God by Serving Others relief ministry of the Prestoncrest Church of Christ in Dallas.
Roach said his own life was a complete wreck until Jesus cleaned it up.
“I’m going to show them (tornado victims) what Christ can do in their lives, both physically and spiritually,” said Roach, who used his mechanical skills to keep chainsaws running.
Churches of Christ Disaster Relief Effort, based in Nashville, Tenn., sent tractor-trailer loads full of emergency food boxes, personal hygiene products, cleaning materials and other supplies.
Disaster Assistance CoC, sponsored by the Lake Jackson Church of Christ in Texas, and the Churches of Christ Disaster Response Team out of West Melbourne, Fla., prepared meals and helped organize volunteers.
“We’re serving as a warm place for people to eat,” said Saturn Road elder Gary Bingham, overseeing a relief site in Garland. “But also, this is where volunteers are being sent out.”
Nearly five years ago, Mike Patterson and son Blake traveled to Tuscaloosa, Ala., to clear fallen trees after a swath of deadly twisters.
“It really helped me, in some ways, to be a little bit prepared for this,” the father said of that mission trip. “(But) it’s very different when you walk in your own home and see the devastation.”
Even before the Pattersons could arrange flights home, fellow Christians rushed to salvage their treasured photographs and search for the family’s 4-year-old cat, Bella. Two days after the storm, the frightened pet was found hiding under a mattress and Sheetrock.
About a dozen of Blake’s friends from the Chi Lambda Phi social service club at Oklahoma Christian University came to help clean up. Likewise, Cameron’s Dallas Christian School classmates worked to lift his spirits.
“God has been watching out for us in so many ways,” Mike Patterson said. “First and foremost, we weren’t here when this thing hit.”
A framed Scripture recovered from the debris. (PHOTO BY MICHELLE PATTERSON)Their next-door neighbors sought cover in a closet under their stairwell, Michelle Patterson said.
“It took 30 minutes and a bunch of people to dig them out,” she said.
At worship the next Sunday, the Pattersons thanked the Saturn Road church for its love and support.
“Everybody was just handing us gift cards, handing us money,” Michelle Patterson said.
Keepsakes recovered from the family’s home include a framed Scripture: Psalm 62:7 holds special meaning after the tornado.
“I could not believe I found it just sitting there in the rubble,” Michelle Patterson said. “It made my day.”

The words still visible through bits of clinging, wet debris: God “is my mighty rock, my refuge.”